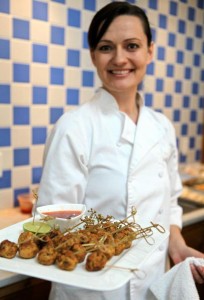 While growing up in the Ukraine, Polina’s passion for food was ignited by countless hours in the kitchen by her mother’s side, learning how to love and nurture the craft of cooking. In pursuit of the American dream, Polina left her comfort zone and moved to America and overcame the language barrier in a community college. Soon after, she transferred to UC Berkeley and earned a B.A. in political science. Upon graduating, she worked for a premier law firm in San Francisco, but after much soul-searching, Polina decided to become a chef and enrolled in the California Culinary Academy in San Francisco. After receiving her culinary degree at Le Cordon Bleu Culinary Arts, she worked for numerous caterers. For creative freedom and as an entrepreneur at heart, Polina launched her own company, Svetlana Catering & Events. It’s named after her greatest inspiration, her beloved mother, Svetlana. Polina’s mother passed on when she was 17, but she lives in her heart and through her cooking.